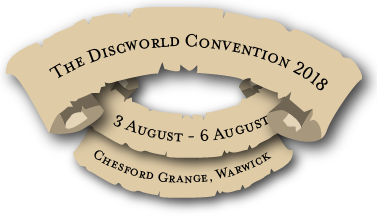 I have been so busy trying to find answers for my hip, complaining about horrible consultants through the proper channels and generally being miserable, that I seem to have completly forgotten to post about the fabulous long weekend in August that was Discworld Convention 2018. Since Sir Terry’s passing, the conventions are still running in order to celebrate his life and “Be more Terry”. Every single time, you come back to Roundworld with more friends than you had before you left home.

There are, of course, the old guard out in full force as well – myself being one of them, thanks to meeting my husband at just the right time that he was able to scrape me in to membership and we could attend our first convention together.

We were in a different hotel this time, what with the Birmingham Metropole apparently really not liking us, but nobody minded. Within a couple of hours of booking in, we’d adopted a newbie (hello, Carina!) and she soon relaxed (and ended up talking to everybody, since literally everybody wants to talk to you). I was greeted with calls of “Hello, Spiderlady!” and had one of those moments that can only happen at a convention: you ask someone how they know you when they greet you by name, and they tell you “I’m on your Facebook friends list” (gives a nod to Tammy).

We didn’t make it to everything we wanted to go to, but even somebody without ME would struggle to do that. We did the opening ceremony, the Troll Bridge panel and a few other things (one involving reenactment swords, because I like swords and the person presenting that panel is a personal friend), but spent most of our time in the bar, waiting to snatch passing friends for hugs, or spending time with old friends and their new puppy. It was a generally relaxed atmosphere all round (even when I sort of got kidnapped so I could meet my fellow wheelie, Jen, in the beer garden. Typical convention behaviour really).

There was also the Hedgehog Party, which I could only attend for snatches at a time before needing to go somewhere quieter. I think I spent most of that evening in the main hotel lobby (AKA Treacle Mine Road) just mingling. My friend Kelly had made me a Discworld charm bracelet that afternoon, and I lost the witch charm in the disabled loo (fortunately a friend noticed it and picked it up for me, but the following day I had to ask Kelly to put the Librarian back on for me because he got caught in my wheels on my way to my room and he fell off too).

We don’t usually stay for the closing ceremony and the Dead Monkey Party, but we decided to this time, and I hope we can do the same in 2020. Leaving for the convention a day early and not having to rush to get home was a blessing for me; this is the first convention I’ve been to where I didn’t rush about so much that I got ill, and I didn’t break any bones (a broken hip is more than enough for this year, please and thank you)!

Getting back to reality was a bit sad; most of us ended up with post-con blues, as usual, but I think we’re all back to not-exactly-normal now. Here’s to 2020!

7 thoughts on “Everything’s Better With Discworld!”